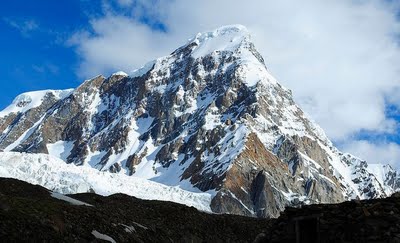 Gondogoro la or Pass is a 5585 meter high mountain pass has one of the most overwhelming mountain panoramas anywhere in the world, with all of the Karakoram’s 8000m peaks close at hand.

It is in Baltistan region of Pakistan 25 km south of the world’s second-highest peak, K2. It connects the Gondogoro Glacier on the southwest and the Vigne Glacier on the northeast. On the southwest side, the route down from the pass descends into the Hushe village which contains the uppermost settlements of the Ghangche District. Most climbers and trekkers approach from the northeast side.

In 1986, a route was established that connects Concordia in the upper Baltoro Glacier to the Hushe Valley over the Gondogoro Pass. Since then, this challenging technical pass has attracted trekkers and climbers alike.

Even though the ascending and descending sides of the pass have fixed dynamic ropes, crossing this pass requires good judgement, top fitness, prior acclimatization, and basic mountaineering skills. Highly skilled high altitude local climbers remain near the top of the pass during the climbing season to maintain the ropes and assist.

The Gondogoro La, though popular with trekkers, involves Class 4 climbing with crampons. The northeast side has up to 50-degree snow slopes with avalanche danger requiring fixed ropes. The southwest side is a longer, continuous 50-degree slope with rock-fall and avalanche danger that requires fixing as much as 300 meters of rope.

When to visit Gondogoro La Gilgit-Baltistan

The pass is easier to cross earlier in the season and can be attempted as early as the mid in June; earlier and one is likely to be the first party of the season to break the trail.

Numerous climbers regard this region as having some of the finest mountain scenery anywhere in the world. At Gondogoro Pass, one overlooks to the northeast what Galen Rowell termed the “Throne Room of the Mountain Gods.” Apart from dozens more, one can see the following famous peaks from the pass:

One can reach there by 8-10 days walking from Askole Shigar valley of Gilgit Baltistan, which is preceded by a jeep ride of 6-7 hours from Skardu Capital of Baltistan Region of Pakistan. An alternative access path is 3-4 days walk via Hushe valley.

Total: No activity found .    view all