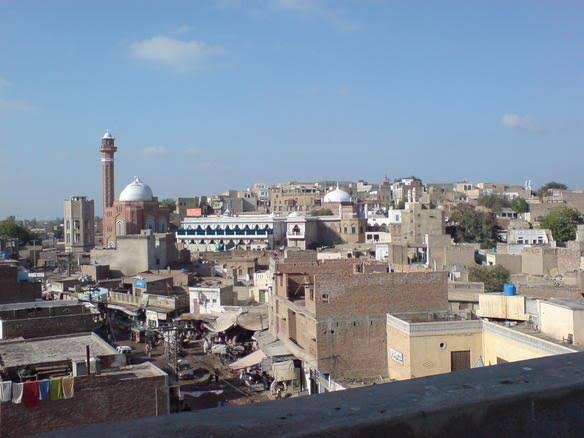 Pakpattan District is a district of Punjab province in Pakistan, Pakpattan is the district capital. According to the 1998 census of Pakistan, it had a population of 1,286,680 of which 14% were urban. It has since risen to 1,563,000.

Pakpattan is the city of the great Saint Baba Farid of Chisti. The original name of Pakpattan was “Ajodhan”. It was renamed Pakpattan after it was used for the first time by Saint Hazrat Baba Fariduddin Ganj Shakar. The word Pakpattan consists of two words “pak” and “pattan” meaning “clean dockland” (Pattan means a dockland or place where ships or boats stop). The city was given this name by Saint Baba Farid. It is said, once Saint Farid having ablution on the bank of the River Sutlej. One local man told the Saint that this water is unclean and place is dirty then Saint Farid replied to him “no its clean water and place’ in the local language “Pak Pattan’.However, King Akbar declared the Name Pakpattan.

Pakpattan District was agricultural region with forests during the Indus Valley Civilization. The Vedic period is characterized by Indo-Aryan culture that invaded from Central Asia and settled in Punjab region. The Kambojas, Daradas, Kaikayas, Madras, Pauravas, Yaudheyas, Malavas and Kurus invaded, settled and ruled ancient Punjab region. After overrunning the Achaemenid Empire in 331 BCE, Alexander marched into present-day Punjab region with an army of 50,000. The Pakpattan was ruled by Maurya Empire, Indo-Greek kingdom, Kushan Empire, Gupta Empire, White Huns, Kushano-Hephthalites and Shahi kingdoms.

In 997 CE, Sultan Mahmud Ghaznavi, took over the Ghaznavid dynasty empire established by his father, Sultan Sebuktegin, In 1005 A.D. he conquered the Shahis in Kabul in 1005, and followed it by the conquests of Punjab region. The Delhi Sultanate and later Mughal Empire ruled the region. The Punjab region became predominantly Muslim due to missionary Sufi saints whose dargahs dot the landscape of Punjab region.

After the decline of the Mughal Empire, the Sikh conquered Pakpattan District. During the period of British rule, Pakpattan district increased in population and importance.

The predominantly Muslim population supported Muslim League and Pakistan Movement. After the independence of Pakistan in 1947, the minority Hindus and Sikhs migrated to India while the Muslim refugees from India settled in the Pakpattan District. The main reason of famicity of this city is due to Hazzrat Baba Farid(Rehmullah). Basically he is the man who renamed Ajodhan Pakpattan. Before his arrival to Pakpattan, there were at least 30,000 Hindus and Sikhs in Pakpattan. He came to Pakpattan on the orders of his murshad Hazrat Qutbuddin Bakhtiar Kaki (Rehmullah) for preaching of Islam.

On July 6, 1910, First Rail Link was established of Pakpattan. 345.7 km (213.4 mi) long Lodhran – Kasur section was opened. This section was later dismantled during World War I, reconstructed and opened again between 1923 and 1924. On April 15, 2002 a new Karachi to Lahore express via Pakpattan was introduced. The name of the train is Fareed Express.

According to the 1998 census, the predominant first language[6] is Punjabi, spoken by 95.9% of the population, followed by Urdu with 3.7%.Haryanvi, also called Rangari, is spoken among Ranghar, Rajput, while the Meo Rajputs have their own language which is called Mewati

The Pakpattan District is known for the fertility of its soil and most of the population of Pakpattan district makes a living on agriculture. The main crops are wheat, rice, cotton, maize (corn), sugar cane, etc. The primary fruits and vegetables that are harvested are mango, guava, carrots, potatoes, oranges and okra.

Malka Hans is the ancient famous town near Pakpattan in Pakpattan District located between Pakpattan and Sahiwal on Sahiwal Road. It is famous for origin of Heer Ranjhawritten by poet Waris Shah.

Shrine of Baba Farid is made of white marble with two doors, one facing east and called the Nūrī Darwāza or ‘Gate of Light’, and the second facing north called Bahishtī Darwāza, or ‘Gate of Paradise’. There is also a long covered corridor. Inside the tomb are two white marbled graves. One is Baba Farid’s, and the other is his elder son’s. These graves are always covered by sheets of cloth called Chaddars’ (the green coloured chaddars are covered with Islamic verses), and flowers that are brought by visitors. The space inside the tomb is limited; not more than ten people can be inside at one time. Ladies are not allowed inside the tomb, but the late Benazir Bhutto, then Prime Minister of Pakistan, was permitted to enter inside by the shrine guardians, when she visited the shrine. Another rare exceptional case was the late Hajjah Kainz Hussain of Jhelum, wife of the late Haji Manzoor Hussain, who was allowed inside the tomb and was given a Chaddar, which resulted in miraculous improvement in her health.

Charity food called Langar is distributed all day to visitors here. and the Auqaf Department, which administers the shrine. The shrine is open all day and night for visitors. The shrine has its own huge electricity generator that is used whenever there is power cut or loadshedding, so the shrine remains bright all night, all year round.. There is no separation of male and female areas but a small female area is also available. There is a big new mosque in the shrine. Thousands of people daily visit the shrine for their wishes and unresolvable matters; for this they vow to give to some charity when their wishes or problems are resolved. When their matters are solved they bring charity food for visitors and the poor, and drop money in big money boxes that are kept for this purpose. This money is collected by the Auqaf Department of the Government of Pakistan that looks after the shrine.

Have Questions? Talk to an expert